CCell: How we grow reefs.

A simple explanation of our two top questions "How do you build reefs?" and "Why?".

When we tell people we build artificial reefs using wave energy, they are usually very interested and supportive yet a little confused. It probably seems like a left-field idea, even to those working in the industry. The questions are often asked; “How do you do it?” and “Why build reefs?”, so I thought I would cover them in a little more detail. 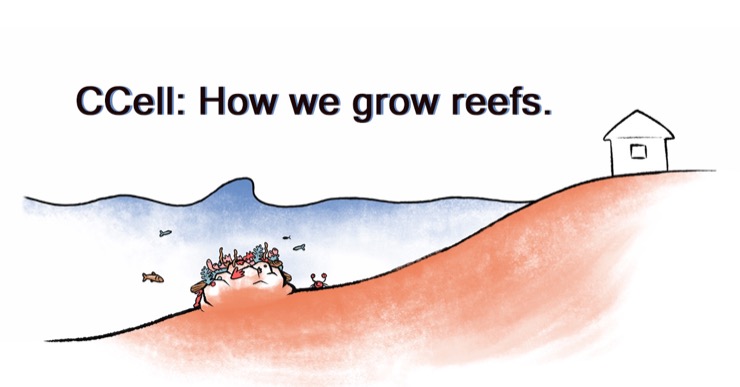 Why do we build reefs…

At CCell we build artificial reefs primarily to help slow coastal erosion. A combination of warming ocean temperatures which create more frequent and severe storms, destruction of coastal habitats for human use and increasingly strong waves (increasing in strength by 0.4% per year) all contribute towards coastal erosion. Some areas have already lost several tens of metres of coastline, causing buildings to collapse into the sea and disrupting infrastructure.

Most coastal erosion occurs when large waves break onto the shore, their impact pulling apart sand, rocks and plants and dragging them out to sea. Conversely smaller waves typically carry small particles of sand and debris onto the shore, depositing them and helping to reverse erosion. An effective coastal defence should, therefore, remove the energy from large waves but allow small waves to reach the shore unaltered.

“How do reefs work in nature?”

The easiest way to reduce the energy in a wave is to cause it to break; once broken, the amount of energy in a wave reduces significantly. In nature coral reefs can reduce a wave’s energy by up to 97%. Waves do not collide with these reefs, but they do impede the flow of a wave’s energy beneath the surface. This steepens waves as they pass over reefs, destabilising them and causing them to break. The effect is similar to tripping up while running; the cobblestone that catches your foot absorbs little to no energy, but as you hit the floor you certainly do. This allows reefs to be lightweight, but have a large impact on the energy in waves.

As reefs get closer to the surface of the water, they affect a larger spectrum of waves; a reef close to the surface could cause almost all waves to break, but a lower reef will only impact the largest waves. The magic of the CCell system is that we can precisely determine the size and shape of a reef, and therefore how close it comes to the surface. This means that by carefully designing the system, we can cause the larger, more damaging waves to break but allow the smaller, restoring waves to pass over the reef. The buildup of rock strengthens our reef structures over time and helps to protect the most vulnerable coastlines.

The knowledge of how reefs protect coastlines has been around for a long time. CCell is now in a unique position to engineer this into a solution for the first time. Our patented wave paddle technology allows power to be generated near the reefs themselves, removing the costs associated with delivering power from the shore to grow a reef. Our smart power management system can optimise and customise the growth of rock around the reef, and ensure that it is performing as expected. The coastal, numerical and CFD modelling capabilities within the company allow us to design a reef system specifically for a given site, optimising the coastal protection it provides.

There are also secondary benefits to reef structures that are very important. Reefs offer a backbone for a vital marine ecosystem of corals, fish, crabs and other aquatic life. Not only does this ecosystem, often referred to as the rainforest of the sea, improve the health of our oceans, but it will also look nice. This may seem like a minor, aesthetic benefit, but it encourages hotels and other coastal businesses to pay for, install and maintain the artificial reef structures. After all, a vibrant and colourful reef generates tourism, especially when it can be explained that the reef is actually protecting the beautiful beach behind it.

But how is it done?

We at CCell have developed an innovative approach to building reef structures based on a well-established method. We start with a steel cage structure, which is very durable and provides a backbone for reefs to form around. In fact, metal reefs have been created for decades using old boats and ships which are deliberately sunk after the end of their use. However, this method is very costly and provides no real benefit to the growth of coral, although it does create a complex habitat for fish. Artificially grown reefs, created using the same method as ours, have also been used for small scale coral restoration projects for over 25 years. Where ours differs is the scale and the application; our reefs are much larger than those attempted before and will provide sizable coastal protection. Another benefit of CCell’s structures is that they are modular and very customisable. We conduct a thorough survey of the seabed where a new CCell reef is to be installed, creating a bespoke design that perfectly fits the natural space. The size of our reef modules allows easy installation with a small diving team, in a very short period of time.

“How do reefs work in nature?”

After installation, we run a safe low-voltage current through the steel structure, drawing seawater minerals (mostly calcium carbonate) to the structure and creating a "natural concrete" around it. This process grows limestone rock relatively rapidly, at approximately 2.5cm (1") per year. As it is made from the same material as their exoskeleton, this provides an ideal base for coral growth. Research has shown that this process encourages corals to grow 2-3x faster than on natural reefs, allowing us to grow large reef structures quickly. After three months of rock growth, our reefs are ready to be seeded with corals from the local hatcheries. Using a range of species, we can create a biodiverse ecosystem, more resilient to environmental changes.

The current used to create the “natural concrete” is generated by a small, wave-powered device that faces out to sea, capturing energy from waves. A lightweight composite paddle captures the wave energy, driving a hydraulic system to generate electricity. It has been designed to mimic shapes found in nature, think the fin of a fish or how you position your hands while swimming, making it incredibly efficient and lightweight yet strong and sturdy. We even tested it in Cozumel, Mexico during hurricane season!

Our smart power management then ensures that the right voltage passes into the reef structure. The voltage must be between 1.2 and 4 volts. Any less and electrolysis can not take place, any more and the rock being formed becomes spongy and less suitable for coral growth. The result of our combined technologies and expertise is a fast-growing, nature-based reef forming around a simple, customisable steel structure, generated by power from wave energy. The simplicity of the solution means it is easy to design and fit into any space and requires minimal maintenance. By installing our reef, the coastline gains protection from erosion, the population of marine life increases, and a new tourist attraction is formed!