Four fascinating talks on the importance of coral reefs, the future of ocean exploration, new plastic recycling processes and Leonardo da Vinci's connection to both art and science.

This year marks the 500th anniversary of the death of Leonardo Da Vinci. Codex is celebrating with a series of talks and events looking to inspire us all with the passion and confidence to think a little differently. 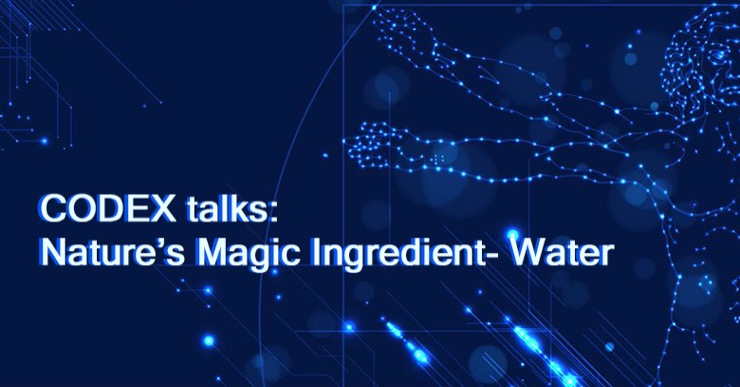 Codex talks embody the Renaissance ideal, with subjects as wide-ranging as Leonardo's own interests.

Named after Leonardo's notebooks, his “Codex”, these events seek to inform and inspire. They cover anything from painting, to physiology, to engineering. This is what Codex tries to capture, the ground-breaking companies and individuals with the vision to think outside the norm. Each event has a specially selected theme for which they find creators and innovators at the leading edge of their industries. At the end of each Codex Talk, the speaker is challenged to make a bold prediction about the future of their technology. In all, it makes for a fascinating evening.

How can we save our beaches?

At the most recent Codex event “Nature's magic ingredient – Water” our Founder and CEO, Dr Will Bateman gave one such talk. He spoke on key topics for coastal communities and their wider implications. He covered sand migration, beach protection, coral restoration and storm defence. Explore our website to learn more about each of these topics. The talk proposed using CCell to grow artificial reefs to counter the effects of coastal erosion.

How will robotics shape the future of Ocean Exploration?

They say we know more about the surface of Mars than we do about the bottom of the ocean and there are many reasons for this. While land can be easily mapped from space this is much harder for the ocean. This is mainly because water is a much worse conductor of electromagnetic radiation than air. When a satellite tries to map the ocean, it is only able to “see” a few meters down. The way to get a look under the surface is with underwater vehicles (UVs), but they come with some drawbacks. To work, UVs need to either be connected to a cable or to stay close to the surface to be able to connect to satellites. This is because it is difficult to get high quality and up-to-date images to travel through the water. Other options are surface vehicles or Autonomous Underwater Vehicles (AUVs). These vehicles are sent off on missions to collect data but they don't send any back at all; they are usually powered by wind or waves. Data is collected from them at a later date when they have completed their mission, but some never come back. Since these devices are usually very costly, lots of money and time can all be wasted if they are lost at sea. Here is where Hydromea comes in. As CEO Felix Schill explained, they are creating a fleet of insightful, portable and affordable AUVs ideal for ocean exploration. With these vehicles connected, they will be able to collect more data than ever before. The data itself can be transferred to those vehicles closer to the surface, who can send it to satellites or other data stations. With the increase in data, they are also able to create 3D maps and more affordably too!

Throughout the scientific world, many people are striving towards improved ocean exploration. This year's Shell Ocean Discovery XPRIZE was also focused on advancing technologies for deep-sea exploration. The aim of the $7M contest was to produce autonomous, fast, high-resolution innovations. The winners, GEBCO-NF, were announced in May. They proposed an AUV that was linked to an Unmanned Surface Vehicle (called SEA-KIT) which would allow longer-term and lower-cost exploration.

With the production of plastics set to increase over the next few years, Adrian Griffiths' company is solving a very real problem. Recycling Technologies is paving the way for previously un-recyclable plastic. Their machine utilises Pyrolysis, using high temperatures to aid in decomposition. This allows it to break down currently unrecyclable plastics such as cling film and crisp packets. From this, the broken-down plastic is reformed into Plaxx® - a valuable hydrocarbon source, similar to crude oil. Plaxx® can be used as feedstock for new plastic products. Their machine is high-tech, scalable and easily distributable. It can be installed at existing recycling centres. This amazing technology to already be implemented in some Scottish councils. Residents can now put all plastic waste into their recycling bin, safe in the knowledge that only around 5% will end up in Landfill. Not only that but Recycling Technologies has also partnered with Tesco to trial a plastic return scheme. As part of the trial, Tesco installed 10 plastic collection booths in stores near Bristol and Swindon. At present 83% of their own-label packaging is recyclable, but if this scheme was brought in all over the country this could rise to around 90%. This is on track for their commitment that all packaging be fully recyclable by 2025. What wonderful news for our oceans…

As curator of Leonardo da Vinci: A Mind in Motion, Stephen Parkin spoke broadly on the Codex collection that is now on show at the British Library. He focused on the Codex Leicester, which is owned by Bill Gates but on loan for the exhibition, and the Codex Arundel, which is held in the British Library. Parkin described the outline of a book Leonardo was planning to write on the topic of water. It covered a wide range of topics from highly detailed and beautiful observational drawings of falling water, to discussions on types of pebbles and rocks, to the experiments conducted around how much force water has and how it responds to objects in its path. It is clear that Leonardo was a formidable scientist, as well as a talented artist. Parkin linked in the artistic works of Leonardo to his fascination with water. He studied how water distorted objects in it in his early work with Verrocchio on the Baptism of Christ. Alongside this Leonardo compared studies of hair texture to that of falling and flowing water. In his much later Deluge Drawings, Leonardo depicted a town swept away by a great flood, showing the hold water had over him. The great mind of Leonardo da Vinci and the power of water go hand in hand, and this talk helped to connect them both.