CCell: How we grow reefs

A simple explanation of our top two questions: "Why are you building reefs?" and "How do you do it?"

When we tell people we build artificial reefs using wave energy, they are usually very interested and supportive yet a little confused. It probably seems like a left-field idea, even to those working in the industry. The questions are often asked; “Why build reefs?” and “How do you do it?”, so I thought I would cover these in a little more detail.

Why do we build reefs…

In CCell we design artificial reefs as efficient nature-based solutions to prevent erosion and promote marine life. Climate change is dramatically raising sea levels and ocean temperatures, causing more frequent and severe storms, and stronger waves (increasing in strength by 0.4% per year). In addition, natural habitats that protect the coastline from erosion are disappearing. On average, mangrove forests are declining at a rate of 0.66% per year; 75% of the world's coral reefs are rated as threatened and 85% of oyster reefs have been lost globally. As a result, one third of the world's coastline communities are in danger, and some areas have already lost tens of meters of coastline, causing buildings to collapse into the sea. 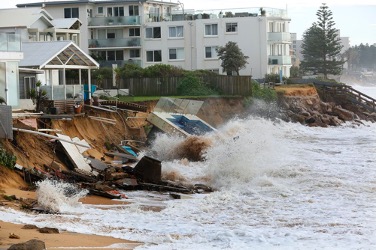 A house damaged by coastal erosion.

Traditional defences are short-term fixes that are aesthetically disruptive and can be irreversibly damaged in storms, releasing debris and contaminants into the ocean.

Natural barriers like coral reefs, are long-term defenses that break large waves but allow small waves to pass through and maintain the natural balance of sediment at the beach.

Reefs are also the backbone of marine ecosystems, because they provide a safe place to breed for thousands of species, which is also key to improving fish stocks. Hence, the implementation of artificial reefs that mimic natural coral reefs not only helps to restore beaches, but also strengthens local fishing economies and promotes sustainable tourism around biodiversity. For more information about how CCell Reefs mimic the natural coastal protection properties of coral reefs, read Reefs vs waves.

Although artificial reefs are widely implemented for coral restoration, their use for coastal protection is limited because they are made of concrete and are therefore heavy and expensive to implement on a large scale. Metal reefs have also been created using old boats and ships which are deliberately sunk after the end of their use. Although the structure is lighter than concrete reefs, this method is very costly and provides no real benefit to the growth of coral, although it does create a complex habitat for fish. In CCell we use electrochemical artificial reefs, where 'marine concrete' containing calcium carbonate and magnesium hydroxides builds up from seawater once the structure is deployed in the ocean. We use lightweight and cheap materials like steel that allow us to implement hundreds of meters of reef while promoting the attachment of corals thanks to the newly formed rock.

But…How do you do it?

The electrochemical artificial reef uses electrolysis to grow calcareous rock on the steel structure. This is particularly important because it prevents the steel from rusting, confers strength to the reef, improves the wave energy dispersion, promotes the attachment of corals, and allows for the reef to self-heal if it is damaged in a storm.

Electrolysis is an electrochemical process where current flows between two electrodes, an anode where water splits into oxygen and protons, and a cathode where water is reduced into hydrogen: 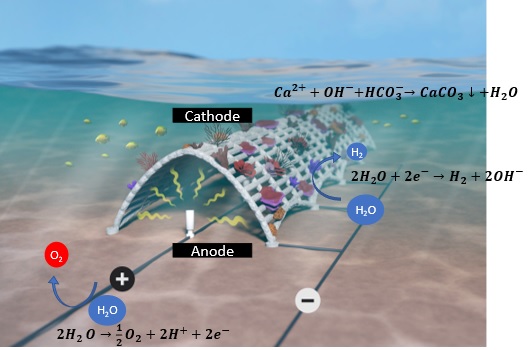 The anode is a small metal grid, and the cathode is the steel structure. When the electrodes are in seawater, hydrogen bubbles produced at the cathode increase the pH, promoting the precipitation of dissolved salts like calcium carbonate at the surface of the cathode.

In our reefs, the cathode is the steel structure acting as the reef. We use electrolysis to precipitate dissolved salts onto the steel to form a layer of calcareous rock. This process grows rock relatively rapidly, at approximately 2.5cm (1") per year:

A sample of CCell Reef in Cancun after 1 month with applied current.

The rock is made from the same material as the coral exoskeleton and provides an ideal anchor point for corals to attach and grow. Indeed, there is evidence showing that this process encourages corals to grow 2-3x faster than on natural reefs, which is great news for coral restoration and protection. The composition and growth rate of the rock depends on the current and voltage input, which we carefully control with our smart power management. The current must be controlled in a narrow range, between 1 and 5 A per square meter of reef. Any less, electrolysis cannot take place. Any more, and the rock being formed becomes spongy and less suitable for coral growth.

The current used to create the “natural concrete” is generated from renewable sources, usually solar panels or CCell's patented wave paddle: a small, wave-powered device that captures energy from waves.

CCell's structures are modular and very customizable. To install a reef, we start conducting a thorough survey of the seabed, creating a bespoke design that perfectly fits the natural space and maximizes the dispersion of wave energy. The size of our reef modules allows easy installation with a small diving team, in a very short period.

Once installed, we connect the smart power management to provide the current for electrolysis. After three months of rock growth, our reefs are ready to be seeded with corals from the local hatcheries. Using a range of species, we can create a biodiverse ecosystem, more resilient to environmental changes than natural reefs.

The result of our combined technologies and expertise is a fast-growing, nature-based reef forming around a simple, customizable steel structure, generated by renewable power. The simplicity of the solution means it is easy to design and implement and requires minimal maintenance. By installing our reef, the coastline gains protection from erosion, the population of marine life increases, and a new tourist attraction is formed! 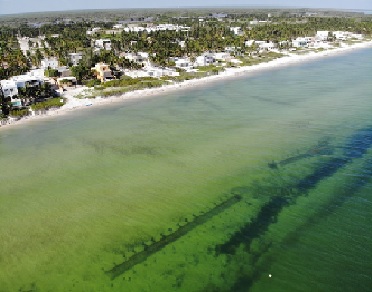 Our 120 m pilot reef protecting the coast of Telchac, Mexico.