The science of capturing wave energy.

How do we get electricity from the ocean waves?

At CCell we harness the power of waves to produce electricity, which we use to grow beautiful artifical coral reefs. But what is the theory behind this, how can waves be used to make electricity?

The CCell-Wave captures wave energy and converts it into electricity.

How is wind made?

To understand how waves are made, we must first understand wind. Wind is caused by the uneven heating of air. The equator receives much more radiation from the sun than the poles do. At the equator sunlight warms the earth, which in turn warms the air around it. This air now has more energy; the molecules within it spread out and move faster, making the air less dense. This allows the warm air to rise when it is displaced by cold air. The warm air begins to move away from the equator and towards the poles. On this journey pole-wards, the air particles become dryer and begin to cool down. By around 30o either north or south, they have lost most of their energy and begin to descend. The air is then rewarmed by the earth and heads back towards the equator in an easterly direction. This is due to the Coriolis forces created by the spin of the Earth and is how the Trade Winds are produced. This cycle of air that creates the Trade winds is called the Hadley Cell. Further North or South than a latitude of 30o, a similar cycle repeats however the winds blow in a westerly direction. This cycle is responsible for the gulf stream, where hotter water flows North East, with help from the trade winds, and colder water flows South West 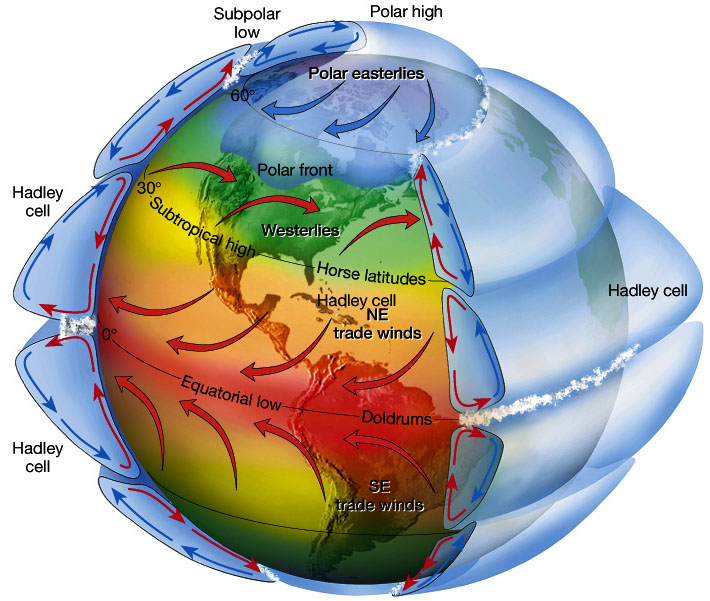 Coriolis Forces combine with the heating and cooling of air to produce the winds of the world.

How are waves made?

When winds blow across a body of water, they transfer some of the energy to the water. The rougher the water gets the more surface area there is between the water and the air. This improves the transfer of energy to the water from the wind. Therefore, the waves get larger the more wind there is. Large stretches of ocean and strong winds combine to make large waves with lots of energy.

The energy these waves have can be broken down into two key components: Potential energy which comes from the elevation of the water surface and Kinetic energy which is due to the movement of the water particles. Throughout the creation and movement of waves, the amount of each type of energy a wave has stays the same when averaged over the wavelength. However, the type of energy it holds will fluctuate between kinetic and potential.

The properties of a wave define its type and impact. Source: The Map Factory

The way in which waves are formed is dependant on the strength of the wind creating them. Since the strength of winds varies, for example you may have stronger winds near the center of a storm, the size and wavelength of the waves produced varies. This variety of waves are pulses of energy travelling through the water, supported by the vastly different densities of water and air. Some of the waves produced travel faster than others which means they can catch up with slower ones. As this happens, the smaller waves (shorter wavelength) combine to produce taller and steeper waves, if the waves get too steep they will break, which disperses their energy into the underlying longer waves. This mechanism repeats and causes the shorter waves to gradually dissipate and bolster the longer waves which go on to travel much further.

How do you capture this energy?

When a wave hits a vertical wall or a cliff, the energy of the wave is reflected back in the same pattern as it had on impact. To successfully absorb the energy of the wave, the wall it is hitting has to move to reflect the wave in such a way that it is now out of phase with incoming waves. If a reflected and an incoming wave perfectly cancel each other out, no energy will remain in the water at the wall's boundaries. All of the original energy must have transferred to the moving wall – this is how we create a wave energy absorber!

Depending on how the wave is reflected it can either amplify orcancel out the incoming wave.

However, this creates two challenges: If it moves too much, the wave energy absorber will dissipate energy to the surrounding water, if it moves too little, useful energy will be reflected out and lost. When the absorber moves it has to push through the water behind it which directly translates to a loss of energy. In Laboratory conditions a dampener, such as a large airbag, can be put behind the tested device to absorb all the energy from its movement. However, this is not possible in the open ocean. An ideal wave energy device should be shaped to minimise the energy lost through movement and reflections, and its motion should be suitably damped for a given wave condition. Ultimately behind your paddle should be as close to flat water as possible. 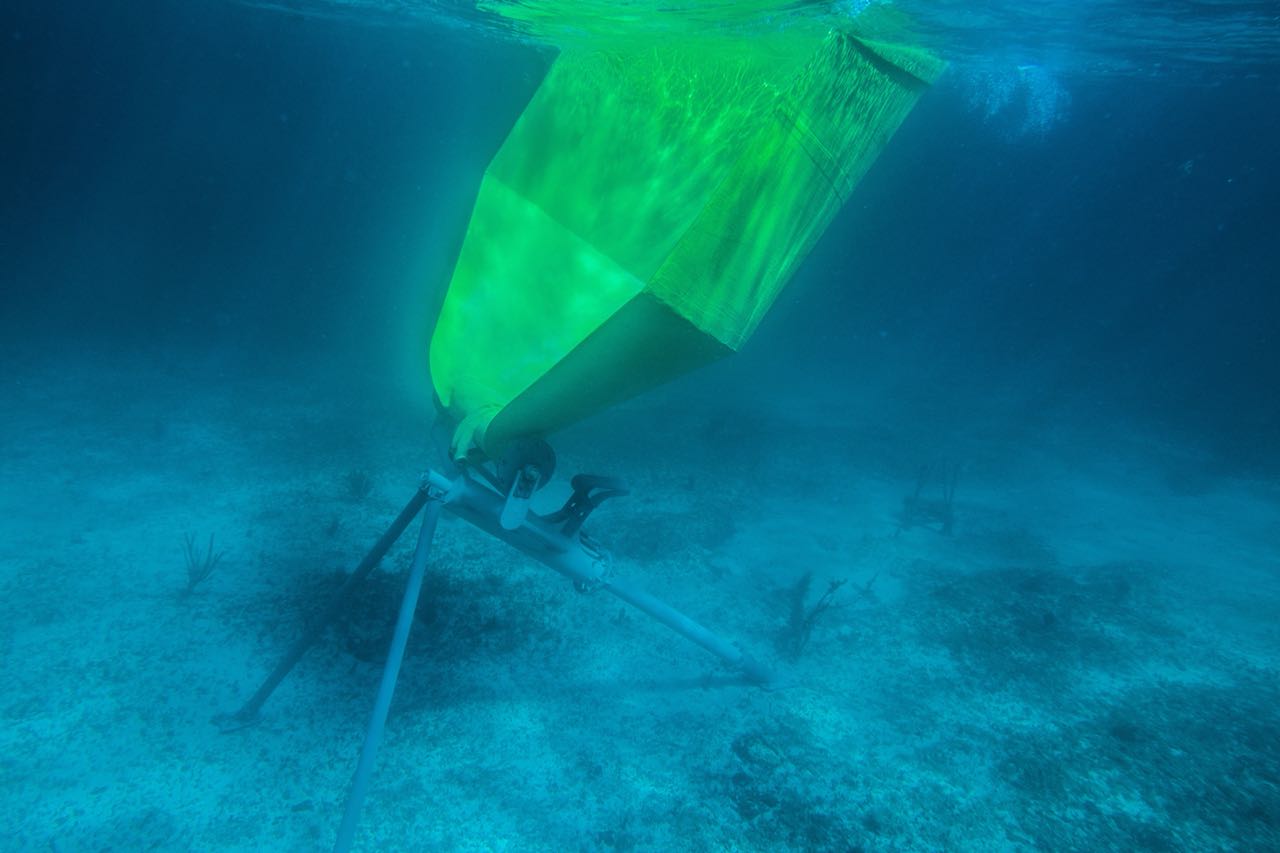 Having a large surface area interacting with the force of the wave allows for efficient energy transfer.

To solve this, we have taken inspiration from nature when creating CCell-Wave. Using a curved paddle allows the backside of the paddle to cut through the water like the bow of a ship, creating as little dissipation of water as possible. The curve of the frontside focuses incoming waves towards its strong central core with any excess energy smoothly channelled over the paddle. This allows CCell-Wave to survive in extreme environmental conditions while efficiently converting wave energy to power. The curved design of CCell-Wave also increases its effective width, that is how much of the width can be used to capture energy. It does this by harnessing power from both the front and the back of the paddle.

While the CCell-Wave is ideal for shallower waters, Pelamis and other companies have focused on capturing energy from the change in elevation of their devices as they float on top of a wave. Unfortunately, these devices were hard to scale up efficiently and cheaply, but several projects based on this principle are still in development. We can learn a lot from the successes and failings of projects like Pelamis, which is why we have kept the CCell-Wave small, low cost and adjustable.

Waves have more than 800 times the energy density than wind, which is why there is such a push for effective and scalable energy absorption. It holds a great potential which we have successfully tapped into and are excited to start seeing the benefits from. By working in sync with nature, we can capture wave energy efficiently and use it to grow artificial coral reefs, while delivering any excess energy to the grid. It is wonderful to be able to use a natural and renewable energy source to solve real-world problems.