Due to a positive response from shoppers, Waitrose is extending their “bring your own box” trial and rolling it out in three more stores.

Plastic waste is on everyone’s mind. We recently talked about a company working towards making plastic recycling more accessible. But at present, the best solution is to reduce how much waste we produce in the first place. 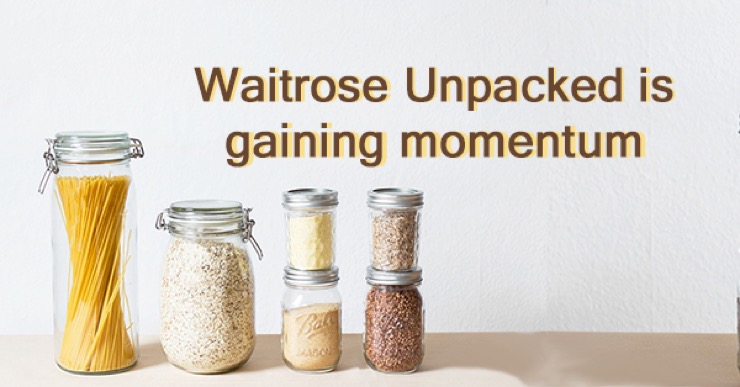 Waitrose Unpacked is gaining momentum: the stores announced a extension to their zero-waste trial.

One of the problems is the food we buy. “The top 10 UK supermarkets produce 810,000tonnes of throwaway packaging each year” warns Ariana Densham, a campaigner for Greenpeace UK. She believes major retailers should be taking plastic reduction more seriously. Thankfully several of them are doing just that.

In April, Waitrose launched its first “Unpacked” station at their Botley Road location in Oxford. The chain, which is part of John Lewis & Partners, encouraged customers to bring their own containers. They can fill them with a range of foods from cereals to frozen veg, all sold without any packaging. For those who wanted to take part but forgot to bring their own containers, a box-borrowing scheme was introduced. Customers could pay a £5 deposit to borrow a container, which they were refunded upon its return.

Not only did they have a selection of 28 Essential Items, but they also removed the plastic packaging from over 160 fruit and veg products. This style of plastic-free shopping is beginning to pop up in many different supermarkets. This year, Morrisons started having plastic-free fruit and veg sections, as did Lidl with their Too Good To Waste Boxes,Tesco had a month-long trial of a package-free section in Watford and Swindon and Sainsburys just announced they are bringing in reusable produce bags in two trial stores.

Waitrose’s Botley Road store also did away with the plastic wrap that comes on both flowers and indoor plants; . The store also had refills of wine and beer as well as washing up liquid and detergent. To make the eco-friendly solution more accessible, the packaging-free items were sold at roughly 15% less than their packaged counterparts.

Tor Harris, head of corporate social responsibility for Waitrose, described the reaction to the scheme as "incredible". Waitrose has elected to extend the trial past its 18th August closing date. They also plan to spread it to other locations in Abingdon, Cheltenham, and Wallingford. She noted that these additional tests of the concept, and further work with customers and suppliers, would allow them to “continue to learn and develop ideas, which have the potential to be rolled out more widely."

The scheme has the approval of environmental organisations with Greenpeace’s Ariana Densham claiming that it was a “bold step” towards the “desperately needed” refill culture in mainstream shops.

While larger shops are slowly getting on board, the UK has seen a rise in bulk or packaging-free shops over the past few years, which have been helping local communities begin to curb their waste production. There have also been several online zero-waste shops set up, which deliver products directly to your door, including Oddbox, which aims to tackle food waste by delivering wonky fruit and veg that would otherwise be thrown out.

Overall these changes to the way we purchase and consume food are a step in the right direction. With low impact living becoming the norm, more supermarkets are pushing towards a more sustainable future. This can only benefit their customers and the environment; a win for all.