Coastal erosion: photos from the field

A look at the coastal erosion experienced by a town on the Yucatan peninsula, where CCell is in discussions with local authorities through local partners to bring about a solution as fast as possible.

When we talk about coastal erosion, be it on our Instagram, Twitter, Facebook or Blogs, we often reference global numbers that illustrate the problem. We point out that roughly 10% of the world's population is at risk from rising sea levels, increasingly frequent storms and coastal erosion. All brought about by worsened climate change. We then try to illustrate the problem by explaining that across the Yucatan, we've seen how businesses spent vast amounts of money to secure their beaches. With £70m spent by the Mexican government to put sand on just 7 miles of beach, which all disappeared within ten years.

But quoted facts and figures, don’t help you visualise the problem. It's hard enough to imagine 1000 people let alone the 200million that are protected by natural coral reefs worldwide. So we thought we show you some pictures from the ground. Taken just days ago, that really get to the root of this problem.

These pictures were taken in a small port town on the northern side of the Yucatan peninsula. While this town does not rely heavily on tourism for its income, as it is mostly made up of houses and small business, their beautiful beaches are still a key selling point for the few tourists they host. They are also the town’s last line of defence against the sea. In just the past two years these beaches have been all but lost to the waves. This is due in part to changing weather conditions, including unusually strong north winds which have caused a drastic loss in sand. A pier, built over ten years ago has also contributed to this increased erosion. This town does not have a reef near it and is bearing the brunt of coastal erosion by waves from the Gulf of Mexico. 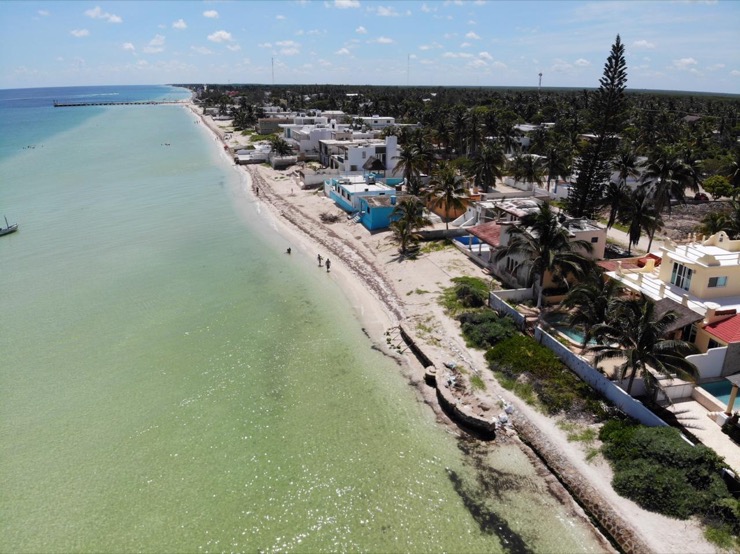 A view of the coastline with several different coastal defence methods at play.

Above is a view along the coast, where you can see the various types of the sea wall that have been put in place to stop the oncoming waves. Some areas have not installed a wall, and their land is eroding at a much faster rate. For those who have chosen to install the often costly wall, once it is built the loss of the beach is a foregone conclusion, and the wall itself detracts from the aesthetic appeal of the area. What's more, the walls they have erected are now themselves falling into the sea as the waves, who's energy increases by 0.4% annually, eventually, wear them away too. 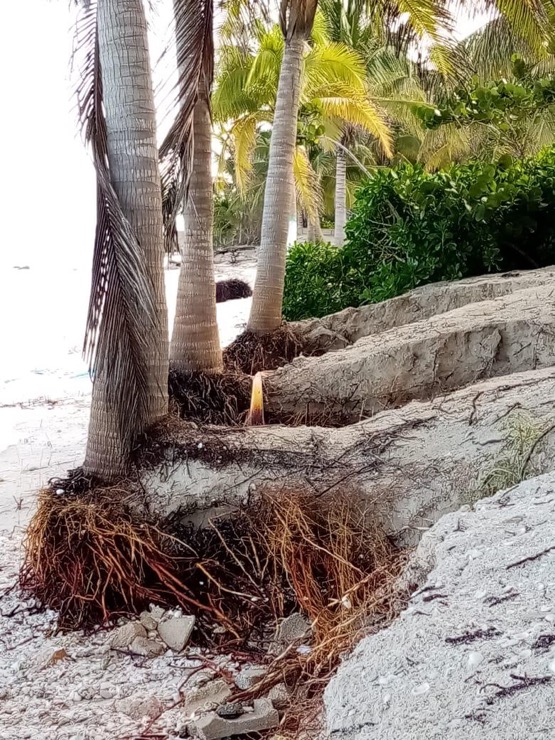 Trees such as these and mangroves are the last line of natural defence.

The natural line of defence can be seen above. The roots of trees hold sediment and soil in place, reducing its erosion, but this picture drastically illustrates just how tenuous this defence is. Worn down to just the root system these treas are clinging to the shore as the earth around them is swallowed by the sea. 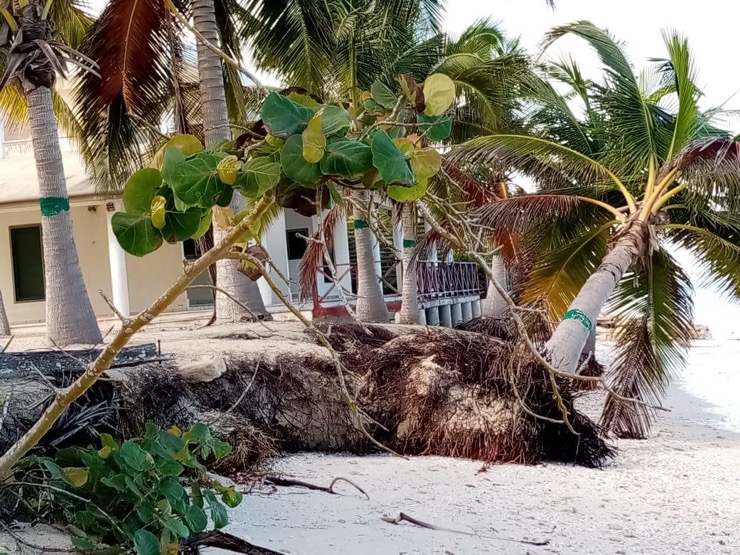 The sea is gettering closer to coastal properties by the day.

This image again illustrates that trees alone cannot hold back the tide. At some point, the erosion around their root system will become too much, causing them to topple. While this fallen tree may provide some further protection, it will eventually be washed away. What can also be seen in this picture is just how close the sea is getting to people’s property. Houses that used to have tens of meters of beach in front of them are now right on the ocean. While some are on stilts, they will sooner or later be claimed by the sea. For those less fortunate, the erosion will come sooner. 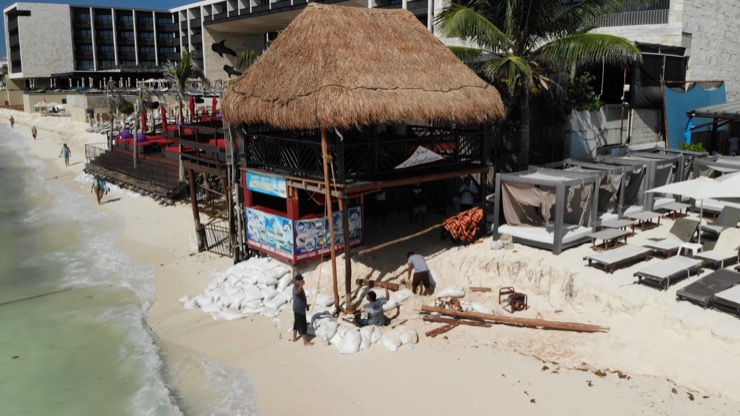 In our initial market, Playa Del Carmen, others are using sandbags to secure their businesses.

This problem can also be seen in Playa del Carmen, where beachfront businesses are desperately trying to support their protective stilts using sandbags. Not only is this an ugly, time-consuming way to try to protect the foundation of their buildings but these bags will not last that long. And once worn away, the sandbags will contribute to plastic pollution within the area. To those facing the ocean every day, this seems like a no-win situation.

Pictures like these, on-the-ground reports from friends and colleagues, and the countless scientific papers on the fate of coastlines are what drives us at CCell. Our reefs, which will be placed out to sea, will halt the destructive power of the waves in their tracks. In nature, coral reefs can reduce the impact of a wave by up to 97% by causing it to break before it hits the shore. But we don't need to make that dramatic a change to the environment, on average we only need to reduce wave energy by 8% to roll back 20 years worth of climatic change.

By installing our reefs, in an area optimised to provide the most protection, we can defend the land from the ocean side. In addition, our reefs can’t be seen from the beach so will be less of an eyesore than conventional walls, sandbags and other short term solutions. Once planted with coral, they will even grow into a beautiful, thriving ecosystem which will attract more tourists. We believe that by working with nature, we can defend those who need it most and help to revive this vital ecosystem.

CCell has now begun equity crowdfunding on Crowdcube. We are raising funds to build a 200m reef in the heart of our target market. Once completed, this reef will serve as a demonstration of our coastal protection capabilities, and we will be able to build more projects in areas such as these where our solution is drastically needed. Get involved here.