Wind to Wave: My move to CCell

Our newest recruit discusses the power of wind and waves, the challenges they face and his work here at CCell.

Having spent the first 2.5 years of my career working at Atkins in the offshore wind sector, I recently joined CCell, transitioning from wind to wave. When I graduated I saw offshore wind as an essential part of any future sustainable energy mix, and was keen to be involved in the design of new developments around the UK. 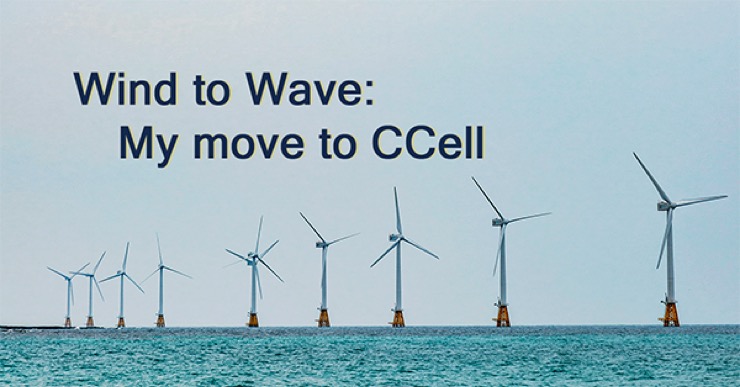 A Recent History of Offshore Wind

During my time in offshore wind, the sector went from strength to strength, with a huge number of projects popping up in the UK, Northern Europe and South-East Asia. The cost of energy has continued to fall, to the point where it can now start to compete with other more established technologies.

To do this, at the moment offshore wind projects are awarded Contracts for Difference (CfDs) by the UK government. A CfD is where the government ensures that wind farm operators are always paid a minimum amount for their electricity (known as a ‘strike price’). In the past year, the average cost of wholesale electricity in the UK was £58.56/kWh, and the monthly average stayed above £39/kWh for the whole year. Wind farms in the most recent round of CfDs cleared with strike prices between £39-42 /kWh. When the wholesale price is higher than the strike price like this, the wind farms can operate subsidy-free and compete with more conventional energy sources.

Two major factors which have helped reduce costs in offshore wind are a move to deeper water, further from shore the winds are more reliable, and the development of larger, more efficient, turbines. In my previous role, I was concerned with the design of the substructure, which is what the turbine sits on top of, and connects it to the seafloor. Both the factors mentioned above make this job a lot harder, as deeper waters and larger turbines put a lot more load on the substructure. All the while, the need to lower costs means that designs have to be as light and cheap to build as possible.

The challenge of balancing strength with cost and manufacturability is nothing new to engineers and is present in almost all civil and structural engineering projects. Offshore wind design, however, is particularly sensitive to small efficiencies because of the number of structures that are built. A typical wind farm might have up to 100 turbines, and each one has its own substructure. A small cost saving in the substructure design can therefore have a surprisingly large impact when it is multiplied by 100. 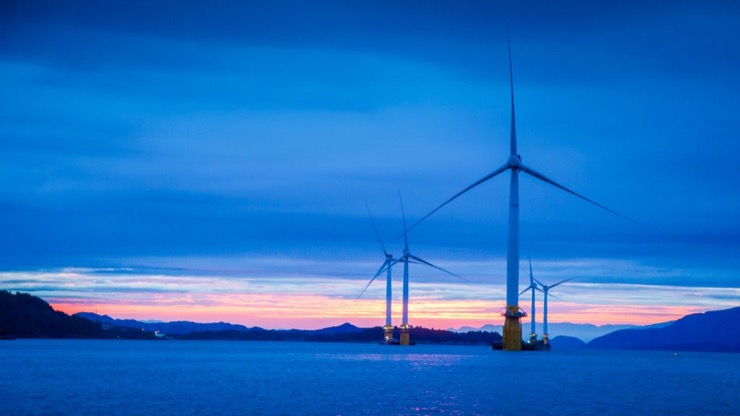 Floating windfarms like Hywind are beginnning to become commercially viable.

The Future of Offshore Wind

In theory, floating technology would be cheaper than a fixed structure in very deep water, as the main floating support is independent of depth. The floating structures are moored to the seafloor with subsea cables, and the cost of these is much lower than for a whole fixed structure. However, at the moment, this technology is not as commercially advanced as fixed structures and it has not been utilised beyond a single small wind farm, Hywind in Scotland.

Unlike for fixed structures, there isn't a wealth of knowledge available from previous jobs which makes working on a floating project an interesting challenge. I was involved in one such project, which used a floating concrete structure to support the turbine. Unfortunately, this project, like many others in floating wind, did not progress through to construction.

These same challenges were once facing fixed offshore wind but with time, and a lot of engineering effort, that technology is now competitive and commonplace. I'm looking forward to seeing how the sector progresses in the coming years, and whether the necessary technological advances will be made to make floating wind a viable option. 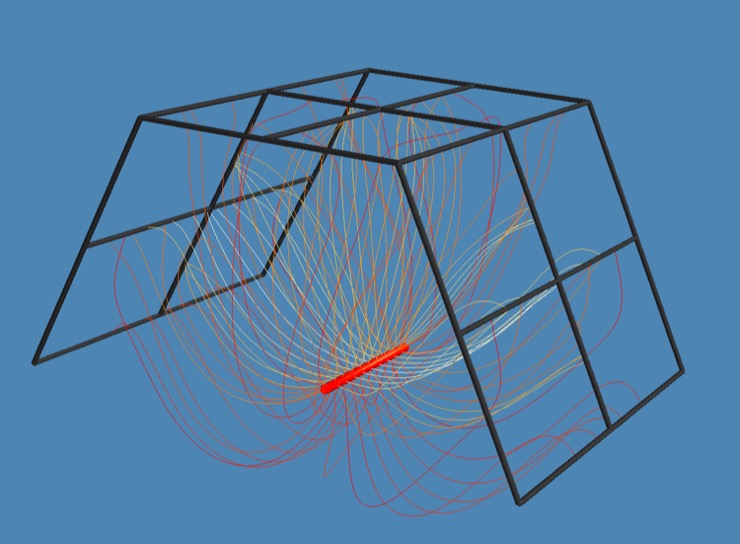 My first piece of work at CCell – modelling the flow of electricity to the reef.

My Switch to Wave Energy

With the offshore wind sector performing well, and offering challenges and opportunities for engineers, it might seem odd that I've decided to switch roles and join a company developing, among other things, a wave energy device. Commercial wave energy in the UK, and across the globe, has not seen anything like the growth of offshore wind.

At university, I studied a course in renewable energy, taught by the late David Mackay, author of the fantastic book "Sustainability, Without the Hot Air". In this course, and the book, he set out a clear demonstration of the potential of various types of renewable energy in the UK. It makes bad reading for advocates of commercial wave energy, as he demonstrates that even if you could extract 100% of the available energy from all 1000km of the UKs Atlantic coastline (a quite generous assumption), wave energy still wouldn’t be able to make a significant impact on the UKs grid energy mix. This is common knowledge within the renewables sector, and prompted a fair amount of confusion among my former colleagues about my switch to wave energy.

The CCell-Wave energy converter, however, is designed for a much smaller scale, off-grid application and in this context, wave power has advantages over other types of energy generation. The device is deployed in the sea near vulnerable coastlines, and the power generated is applied at source to drive electrolysis and the growth of artificial coral reefs, which mimic a natural coastal defence. For this application, a cheap, lightweight, small scale wave energy device is perfect. It allows the relatively small amount of necessary power to be supplied to the reef, without needing any long cables running back to shore, and without any large, disruptive infrastructure being installed out at sea.

While offshore wind has found its place by going bigger and bigger, with larger turbines and more expansive farms, the CCell-Wave device is aiming to have a large impact on the defence of vulnerable coastlines by deploying small, efficient devices and using the power in a smart, sustainable way. The development of this device presents a whole host of unique challenges, and I am looking forward to getting stuck in!